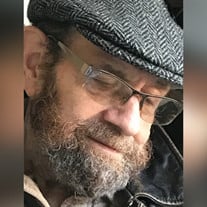 Bruce Harker Bowersock, 79, friend to all who met him, explorer of the universe and master of a panoply of artistic styles and disciplines, died peacefully at home in Ona, WV on July 20, 2017 after a valiant battle against long-term illness. Born July 16, 1938 in Baltimore, MD to his late parents architect Warren Bowersock and wife Edna (Coles) Bowersock, Bruce was a painter who worked professionally as a graphic designer. His effortless ability to teach art to any student came to the fore in his later life and his influence on his pupils can hardly be overstated. He studied at the Maryland Institute of Art and the Ringling School of Art and Design in Florida and served in the Maryland Air National Guard. Once a wanderer of Fells Point in Baltimore and later an art community anchor and gallery owner in Huntington, WV, Bruce was a member of Bethesda United Methodist Church in Ona and was an inveterate reader, animal lover, aviator, and collector of books and cats. He leaves behind a world noticeably less colorful and stimulating for his loving wife, Lillianne (Davis) Bowersock; step-children, T.R. Massey (Angela) of Worthington, OH, Tyler Massey (Tara) of Malvern, United Kingdom and Claire Massey of Milton, WV; Lil’s sister Deb Swanson (Jerry) of Ghent, WV and George Davis (Kelly) of Fairmont, WV. Also, surviving are Bruce’s sisters; Barbara Lewis of Baltimore, MD and Cindy Miller of Frederick, MD. A celebration of Bruce’s life will be held from 5:00 P.M. – 8:00 P.M., Saturday, August 5, 2017 in Bruce and Lil’s former art gallery, Watercolor Dreams, 1102 3rd Ave., Suite 104 in Huntington and also on August 6th at Bethesda United Methodist Church at 12:30 pm. Online condolences may be expressed to the family at www.tri-statecremationsociety.com.. In lieu of flowers, please consider a donation to Hospice of Huntington or contributions in Bruce’s name for Bethesda United Methodist Church. FC17-078

Bruce Harker Bowersock, 79, friend to all who met him, explorer of the universe and master of a panoply of artistic styles and disciplines, died peacefully at home in Ona, WV on July 20, 2017 after a valiant battle against long-term illness.... View Obituary & Service Information

The family of Bruce Harker Bowersock created this Life Tributes page to make it easy to share your memories.

Bruce Harker Bowersock, 79, friend to all who met him, explorer...

Send flowers to the Bowersock family.