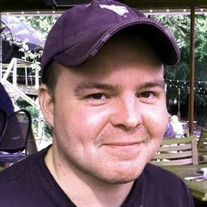 Charlie Blizzard, beloved son of Joe Blizzard and Laura Cox, brother to Gordon Blizzard, of Winfield, WV, departed this earth on Sunday, March 20, 2022. He was born Charles Joseph Cox Blizzard in July 10, of 1983, also on a Sunday morning. He was well‐travelled, having grown up in Cross Lanes, West Virginia, Centreville, Virginia, Manassas, Virginia, Eleanor, West Virginia, and Winfield, West Virginia. As an adult he lived and worked in Winfield, Pflugerville, Texas, Flagler Beach, Florida, Sunrise, Florida, Irving, Texas, and Charleston, West Virginia. He was gifted with a brilliant mind for mathematics and science, and he studied Engineering at Marshall University, Chemistry at West Virginia State University, and Mechanical Engineering at West Virginia University, carefully avoiding burdening himself with a degree in any of those subjects. He began attending Winfield Church of the Nazarene in 2016 and through a miracle of God’s Grace, Charlie managed to convince his father, a poor sinner, to join him there. His death was caused by an aggressive cancer of the liver which had advanced to a terminal stage by the time it was detected. Although he was severely ill with multiple organ failures, God, working through the outstanding staff at Cabell‐Huntington Hospital ICU granted Charlie a day of alertness and lucidity on Saturday, and many things both solemn and light‐hearted were discussed. That evening, in sound mind and full awareness, he chose to enter palliative care and allow God to take him peacefully. A Memorial Service is tentatively planned for the afternoon of Saturday, April 9, at Winfield Church of the Nazarene. Details will be provided when the arrangements are finalized. Ferrell-Chambers Funeral Home, Huntington, WV is honored to assist the Blizzard family. Online condolences may be expressed to the family at Ferrell-ChambersFuneralHome.com.

Charlie Blizzard, beloved son of Joe Blizzard and Laura Cox, brother to Gordon Blizzard, of Winfield, WV, departed this earth on Sunday, March 20, 2022. He was born Charles Joseph Cox Blizzard in July 10, of 1983, also on a Sunday morning. He... View Obituary & Service Information

The family of Charles Joseph Cox Blizzard created this Life Tributes page to make it easy to share your memories.

Send flowers to the Blizzard family.