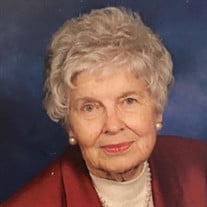 Lucille Davis Juett, the wife of the late Dr. Tilman Juett, mother of Judy Doyle (Malcolm Tracy)of Broken Arrow, Ok, Becky Miller(David) of Kuna, ID, and James Kent Juett of Ashland, Ky passed away February 15, 2022. She is also survived by 4 grandsons Brian Doyle(Amber) of Sand Springs, OK, Michael Doyle(Ashley) of Collinsville, OK, Matthew Miller of Louisville, KY and Jonathan Miller, MD(Amber) of Boise, Idaho, and 6 great-grandchildren. Lucille was born in Jacksboro, TN Dec.13, 1924. She graduated from Berea College, Ky. In 1947 she graduated with a Masters degree from the University of Kentucky where she met her husband. They were married on Dec 21, 1947, for nearly 45 years until his death on July 23, 1992. Lucille was preceded in death by her sister Lillian Drew, mother Addie Willoughby Davis Boggs, and father James Davis. Lucille and Tim, educators, lived in Oregon, Nebraska, Ohio, Indiana, and Kentucky. Lucille taught high school and was an instructor at the University of Cincinnati and Marshall University. After retiring she sold real estate. She had lived in the same home in Ashland from 1972 until February 2021 when she moved to Woodland Oaks Healthcare Center. In her senior years, she enjoyed going to Ashland Senior Center. She was active at First Christian Church. Lucille often could be found at the library followed by a walk in Central Park. Lucille enjoyed Wheel of Fortune and Jeopardy and playing Scrabble. She was kind to others and passed this trait to her children. Her beautiful smile and humor will be missed by many. In lieu of flowers, the family has asked for donations to go to First Christian Church in Ashland, Ky. Memorial service will be held on February 25, 6:00 pm at First Christian Church in Ashland, Ky. She will be buried next to her husband in Owenton, KY. Ferrell-Chambers Funeral Home, Huntington, WV is in charge of arrangements. Online condolences may be expressed to the family at Ferrell-ChambersFuneralHome.com.

The family of Lucille Juett created this Life Tributes page to make it easy to share your memories.

Send flowers to the Juett family.