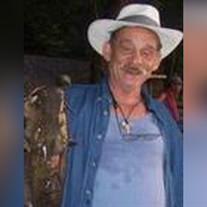 On November 23, 2016, God called home his beloved son, Roger Lee Smith, Sr. He passed at home, after bravely battling lung cancer. Roger was surrounded with love and looked into the eyes of the love of his life, Betty, until he took his last breath. Roger loved his family with all that he had and he gave selflessly all of his life. He was a Supply Sergeant in the United States Army and retired from the Wayne County Board of Education. Roger was a strong role model for his children and a wonderful provider for his whole family. He taught us to love, laugh, enjoy life, and more importantly, to walk in faith with the Lord. He was an adoring husband, an awesome Dad, an adored Grandfather and a loyal friend. He took a part of our hearts to Heaven with him. We will continue to love him, miss him and think of him every day. We know that he has received his crown of glory and he is preparing a place for us all to gather together again one day. We love you! Roger leaves behind to celebrate his life his beloved wife, Betty; his children: Roger Lee Smith II (Dana), Rodney Lloyd Smith (Kathy), Rainelle Lynn Ross (Richard) and Robert Lewis Smith (Elizabeth); his 12 grandchildren: Sydney Carlyle, Shelbie Reece, Cole Ryan, Baylee Grace, Caleb Seth, Shawn Anthony, Jacob Tyler, Peyton Boyd, Gabriel Lewis, Kendra Paige and Wade Michael; his special friends, Matthew Rickman and Heather Rickman. Also surviving are his siblings: Nana Smith, Art Smith, Doug Smith and Howard Smith. Roger was born on August 24, 1944 in Ceredo, WV; a son of James Dewey Smith and Mamie Bell (Neal) Smith. He was preceded in death by his parents; his siblings: Mary Kelley, Wilma Smith, James Smith, Zeke Smith, Harold Smith, Eugene “Hard Rock” Smith and Charles “Shorty” Smith; Roger’s wishes were to be cremated so there will be no services. He was a member of the First Baptist Church of Ceredo and American Legion Post 93 of Kenova, WV. Condolences may be expressed to the family online at www.ceredo-kenovafuneralhome.com. 16-074

On November 23, 2016, God called home his beloved son, Roger Lee Smith, Sr. He passed at home, after bravely battling lung cancer. Roger was surrounded with love and looked into the eyes of the love of his life, Betty, until he took his last... View Obituary & Service Information

The family of Roger Lee Smith, Sr. created this Life Tributes page to make it easy to share your memories.